Role of ELNs in patent matters after the America Invents Act

How to protect your scientific IP and why the use of an ELN remains essential in patent matters even after the implementation of the America Invents Act.

By Cynthia R. Wright in Guides

Before the implementation of the America Invents Act (AIA), patents were issued on a “first-to-invent” basis, and an inventor’s lab notebook was essential in proving that an inventor was the first to invent. Beginning on March 16, 2013, the AIA switched the approach in the United States to a “first-to-file” system wherein the first inventor to file a patent application wins the race to patent their invention.

This article explores whether an electronic lab notebook (ELN) is still essential in patent matters after the implementation of the AIA.

During 2019 and 2020, the USPTO had an interference inventory of 15 and 10 proceedings, respectively (uspto.gov). The pending interference proceedings all relate to patent applications filed before the implementation of the AIA. 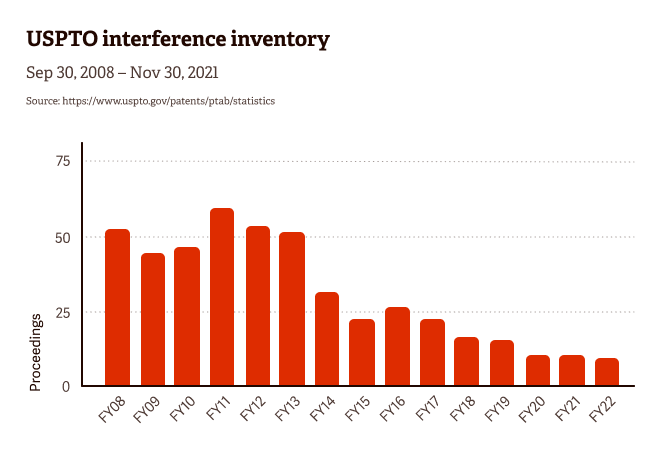 While the number of interferences is quite small, ELN software may be essential to proving your case if you happen to be involved in an interference. In fact, an ELN may be the only way that inventorship can be established.

Applications filed after the AIA

The AIA did not impact pre-AIA inventorship questions such as:

ELN software can be indispensable in helping to resolve these types of inventorship issues.

All lab personnel should utilize ELN software, whether that personnel is specifically hired to invent or is merely employed as a technician. The ELN should record all experiments conducted in the lab and any lab resources utilized by an employee to perform their duties.

What rights would a lab have if one of its lab technicians identifies a new method of completing routine experiments that allows the experiments to be completed faster while reducing the amount of waste produced? Typically, a lab in this situation would not have any rights to patent or license the new method (assuming no assignment agreement has been executed by the technician to assign the new technology to the lab). In this situation, the lab typically retains “shop rights” to use the new and useful method royalty-free. The ELN maintained by the technician may be necessary to substantiate a lab’s claim of “shop rights.”

Often two or more inventors or labs collaborate on a project so that each inventor, or lab, investigates a distinct portion of a complex issue. Who is the inventor if a new and useful process or product is invented during a collaboration? Inventorship is important because it determines ownership and who financially benefits from a patent (a patent often vests with the inventors and the lab that employs them).

The following example is illustrative:

X is employed by Lab 1 and works in California, while Y and Z are employed by Lab 2 and work in Massachusetts. The inventorship listed on both patent applications will need to be corrected to protect the patent rights of Labs 1 and 2.

The previous example demonstrates how important inventorship is and the importance of creating research documentation to substantiate and verify a claim of inventorship. Each inventor should maintain an ELN to resolve inventorship issues quickly and early during the patent process. In cases of collaboration, the ELN of the inventors may be the best evidence establishing inventorship. 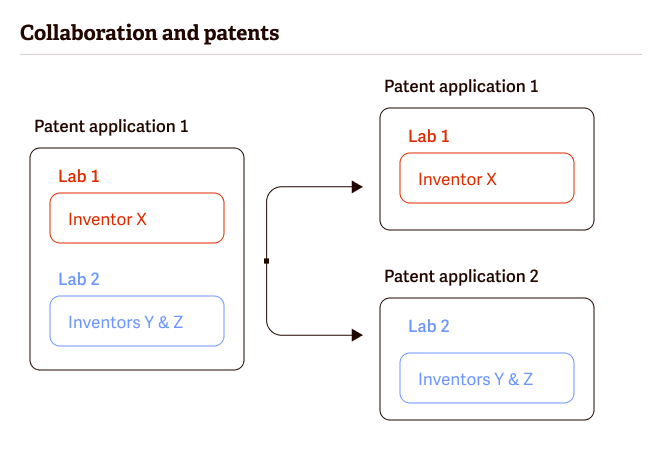 The USPTO can reject patent applications that fail to name all inventors for failure to name the correct inventorship. See In re VerHoef, No. 2017-1976 (Fed. Cir. 2018). In VerHoef, the named inventor was denied a patent because the application failed to name an inventor of an “essential” feature of the invention.

Generally speaking, each joint inventor of a patent has a right to “make, use, offer to sell, or sell the patented invention...without the consent of and without accounting to the other owners.” An inventor owns whatever he invents irrespective of whether he is named an inventor on a patent application.

X has now left Lab 1 to form Lab 2 to make and sell Patent A. Lab 2 is now a direct competitor with Lab 1. The ELN of both Y and X while at Lab 1 may be the best evidence of whether X was an unnamed inventor of Patent A.

If X worked at Lab 1 and was an unnamed inventor of Patent A, X might be found to be infringing on Lab 1’s patent rights if X executed an assignment of his rights to Lab 1. Alternatively, if X was a joint inventor of Patent A and X did not assign his rights to the invention to Lab 1, then X may have the right to make and sell the new patented chemical composition, including licensing Patent A to Lab 2. 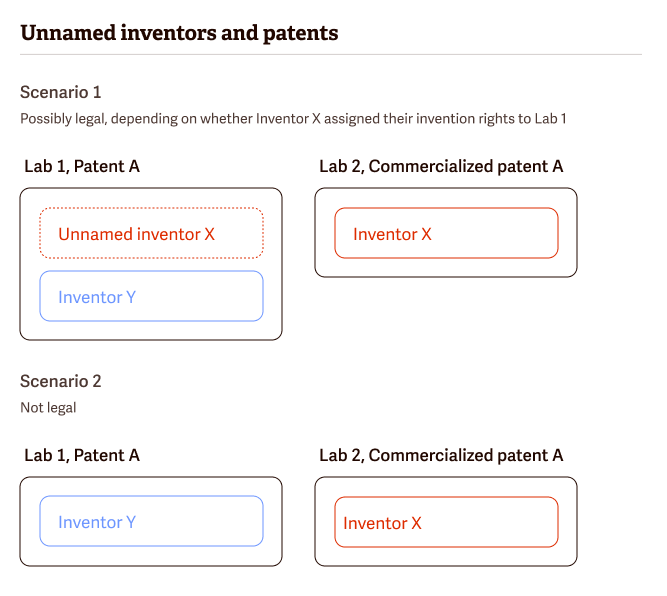 A real-life example of what can happen when an inventor is removed during the prosecution of a patent application is found in Ferring B.V. v. Allergan, Inc., No. 20-1098 (Fed. Cir. 2020).

This case illustrates that patent law can be a minefield.

A patent is invalid if it fails to name the true inventor(s). In cases wherein a competitor is accused of infringing an issued patent, the infringer may allege that the patent is invalid due to a failure to name the correct inventors. A mistake in naming the correct inventor(s) of a patent can only be corrected upon showing that the mistake in naming the inventor(s) occurred through error and without any deceptive intent.

ELN software can help prevent errors in naming the inventor(s), thus preventing future patent validity issues and protecting patent rights. If questions of inventorship arise, then the applicable portions of the ELN can be forwarded to the patent attorney or agent prosecuting the patent application to answer these questions.

The AIA did not affect pre-AIA non-inventorship issues such as novelty. US patent laws require that an invention disclosed in a patent application be novel. 35 U.S.C. §102(a)(1).

During an examination of a patent application, the USPTO may require the applicant to show that the invention is, in fact, novel.

Novelty can be difficult to prove, particularly in applications disclosing new chemical methods. For example, Inventor X files a patent application on a new method of attaching an oligonucleotide (oligo) to a silicon surface via an oxime bond. The prior art discloses numerous devices that attach oligos to a silicon surface via an amine bond. An oxime bond is one type of amine bond. The USPTO looks at whether the disclosed oxime bond attachment method is novel compared to the prior art amine bond attachment methods.

If X is conducting cutting-edge research, then there may not be any published literature or published patent disclosing the novelty of X’s new method of coupling an oligo to a silicon surface via an oxime bond. For example, X may wait until a patent is issued before his research is published. How do you show novelty in this situation? You may show novelty by providing data from X’s ELN showing the unexpected results obtained from the oxime method compared to the other amines tested. The raw data in the ELN may also be converted into a table or graph and provided to the USPTO.

In summary, ELNs may be necessary to establish inventorship in “first-to-invent” and “first-to-file” situations.

ELNs may also be critical for a lab or company to: